Free Up Resources and Let Portable Traffic Devices Do the Work 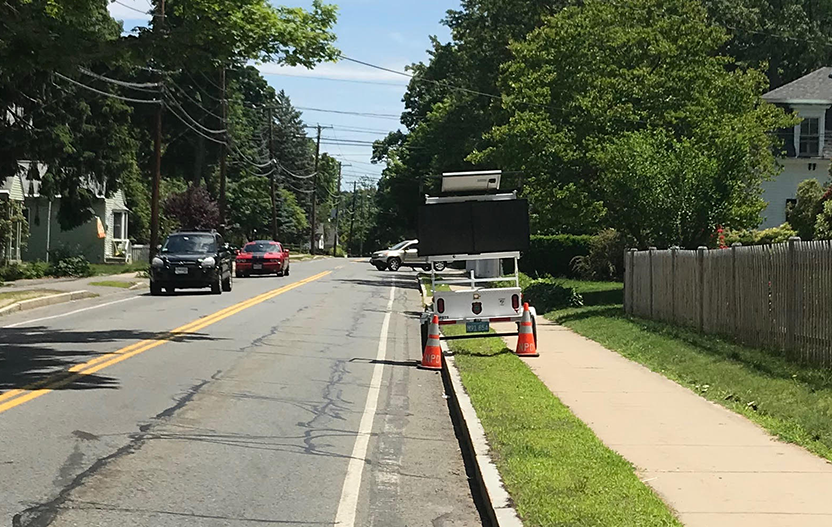 If your agency needs to stretch the budget—what agency doesn’t?—you know it’s challenging to manage traffic flow and safety with fewer resources.  You’re trying to do more with less and less; you may have even developed a real talent for this in many areas.

When it comes to traffic calming and traffic safety programs, it’s not easy to achieve and sustain program goals after budget cuts. It costs money to post officers on busy roads to monitor traffic and enforce speed limits, but it can be difficult to reallocate these resources from other critical duties so they can sit in their patrol cars and identify speeders. 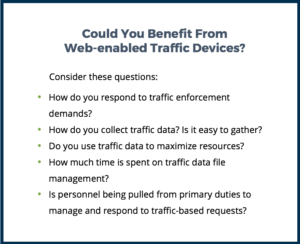 Then there are the issues of ongoing data collection and reporting— traditionally two time-consuming and cumbersome tasks. If you’re fortunate to have one or more radar speed displays at your disposal, you know how effective they are at alerting speeding drivers to slow down as well as giving you valuable feedback about the most effective times to conduct enforcement activities.

But dispatching someone to drive to each sign to collect data (not to mention check batteries, make sure the signs are where they’re supposed to be and that they have not been tampered with) means taking another resource out of the field. That’s not always something you can afford to do when staff is already stretched thin.

The public demands a lot when it comes to traffic management, and the pressures and obligation to serve and protect citizens won’t decrease, even as funding is being cut. That’s why it’s important to maximize every resource and traffic device available and find cost-effective ways to leverage technology for both quick wins and long-term results.

Web-enabled traffic calming and speed enforcement devices can augment the work of agency by being on patrol 24/7. They can record accurate information (and in stealth mode without unduly influencing driver behavior), can be accessed from any Internet-connected device to check batteries, confirm location, program messages and other parameters, and allow you to download traffic data in real time for reporting. Also, by storing traffic data in the Cloud, you eliminate time-consuming data file management.

How the Natick Police Department uses their Web-enabled ATS Devices 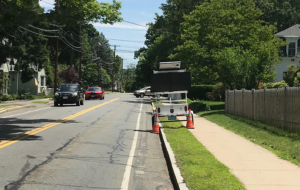 in Massachusetts is using their ATS devices in different ways depending upon the situation.  Each year, Natick is home to Miles 8 through 12 of the Boston Marathon, and, as you might imagine, the world-famous event attracts a huge influx of visitors that results in a sharp increase in traffic. For the past several years, the Department has deployed trailer-mounted SpeedAlert 24 radar speed displays from ATS to communicate event-related messages to the public. Because the portable signs and lightweight trailers are easy to move from location to location, they can be used for different purposes whenever and wherever they are needed.

Before the event, the signs notify motorists and residents of impending event-related road closures. During the race, the signs are stationed along the route to direct runners to medical tents and emergency shelters should they be required. After the race, the signs can be repositioned to direct spectator traffic out of the area to minimize congestion. Sign messages are pre-programmed remotely using TraffiCloud so that officers don’t have to drive to each sign to change messages, which would be problematic during such a busy, crowded event.

The SpeedAlert radar speed displays get plenty of use in Natick the rest of the year, too. The Department utilizes their four SpeedAlert 24 signs and two SpeedAlert 18 signs to run speed surveys they use to clear complaints. This saves them from having to assign officers with Lidar to each location to collect speed data.

A radar speed display is set up at the location in question to gather the speed data—first in stealth mode so drivers are unaware they are being monitored, then in active mode to display driver speeds as they pass, and finally in stealth mode again to capture additional information.

Extended Speed Summary reports are generated in TraffiCloud, comparing before and after average speeds to measure the sign’s effect on traffic. The reports are kept on file where they can be shared with the state of Massachusetts as needed. Another helpful report is the Enforcement Priorities report. Says Officer Scott Lacerna, “The enforcement reports are huge because they allow us to utilize our resources in a more effective manner. We are a department of 60, and I’m the only traffic officer—the radar message displays are great because they allow me to immediately identify where resources need to be.” 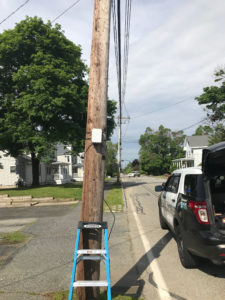 Because ATS signs are easy to deploy and redeploy as needed, they can be mounted temporarily on a pole, stand, trailer or vehicle hitch, then moved to a new location to calm traffic on another road. The Natick Police Department also uses StatTrak off-road counter classifiers with speed measurement from ATS because, at as little as three pounds each, StatTrak is easy to install, take down and redeploy at each new location.

“We were using road tubes, but using StatTrak we avoid the mess of nailing tubes to the ground and then tearing them back up,” Officer Lacerna said. “It’s far easier to tie a StatTrak to a pole. We use four-foot zip ties to secure it to the pole, then we chain it with bike chain so that they don’t get stolen. I can put two StatTrak devices up in 30 minutes at two separate locations.”

The police rely on the StatTrak’s speed measurement capability to run quick, accurate speed surveys that they can generate in seconds using the TraffiCloud remote traffic management system. Unlike speed trailers, which can’t be used at every location, StatTrak is installed on the side of the road, away from direct vehicle contact for safety and uninterrupted traffic flow. The speed surveys are used to determine if the department should invest more time and resources into a particular roadway, and since oftentimes the data proves there is no issue, the Natick police can focus on what they do best—protecting the people.

By being resourceful, the Natick Police Department and many other law enforcement agencies are achieving their goals and managing safety more efficiently and effectively.