How to Resolve Speeding Complaints and Improve Community Relations 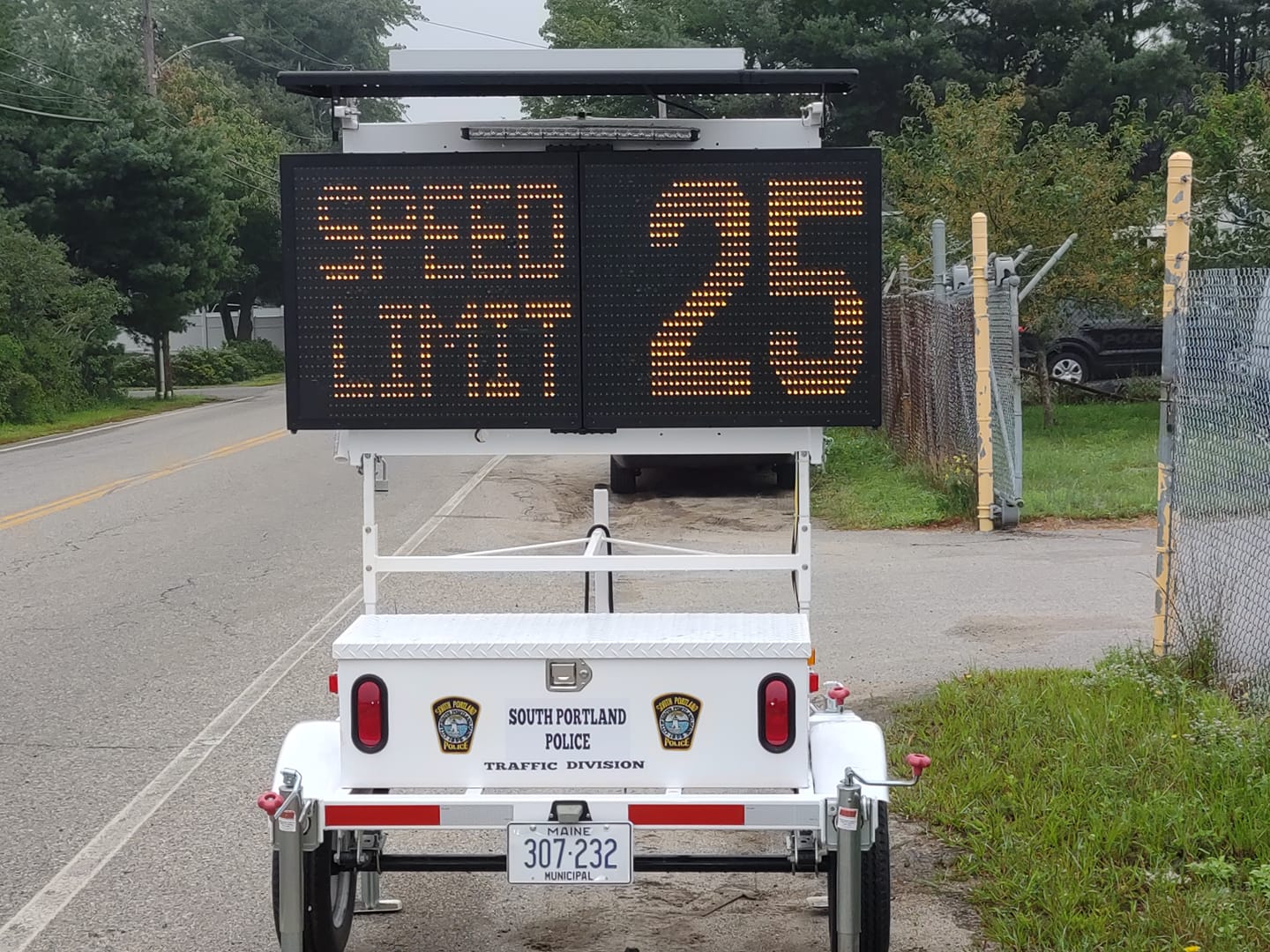 Any PD in the country, the number one complaint is traffic incidents. I mean let’s be serious, especially in a community like Maine, where we’re from, people, fortunately, aren’t dying of murders or anything like that. The majority of people that are dying have to do with vehicles: fatal crashes, pedestrians getting hit, bicycles getting hit.

To understand how police departments can use All Traffic Solutions technology and data to resolve speeding complaints and engage with the community to resolve complaints, we spoke to Traffic Specialist Officer Navarro of the South Portland Police Department. He uses SpeedAlert signs and StatTrak counter classifiers to address speeding complaints made by citizens, conduct traffic studies for the City Manager, and encourage safe driving habits in South Portland.

For context, Maine is ranked one of the safest states by multiple publications, yet, as the quote from Officer Navarro above states, speeding is one of the biggest concerns for police departments across the state.

There were 3,081 crashes due to speeding in Maine in 2021 alone. It’s four months into 2022 and close to 17.5% of crashes in Maine are caused by speeding. On average, speed has been a factor in 4,600 vehicle crashes per year in Maine. Speed has been “a contributing factor in 19% of all crashes and 42% of all fatal crashes.”  These statewide numbers are close to nationwide trends, with the National Safety Council finding that 26% of all traffic fatalities in 2019 were due to speeding (which averages out to over 25 deaths per day due to speeding). Speeding was also a factor of 12% of injury related car crashes, and 9% of property damage crashes.

The danger of speeding in Maine and across the nation is clear, so how does Officer Navarro address the many speeding complaints and concerns he receives? And how does he resolve the complaints, figure out if there are speeding problems, and reduce speeding in problematic areas?

Here is the step-by-step process from Officer Navarro on how to resolve speeding complaints and improve community relations:

First, speeding complaints and concerns will come in from citizens. “Really it started as a culmination of different complaints we would get. People would call the city or the Chief and say ‘hey you know there’s reckless speeding on our roads we’d like law enforcement.’ So basically I would take those complaints and almost put them in like a spreadsheet.”

After logging speeding complaints from concerned citizens in South Portland, Officer Navarro will take the time to go talk to the complainants and inform them that he’s going to see if there are neighborhood speeding problems on the road. “Say the first three said Dawson Street and so what I’d do is meet with the complaint in person and say ‘Hey look, we’re going to address your speeding issues, speeding concerns – what I’m going to do is conduct a traffic report using our new technology from All Traffic Solutions.”

Show the Data and Reports to Concerned Citizens

Once Officer Navarro receives the data from his StatTrak traffic counters and SpeedAlert signs by accessing it through TraffiCloud, he will reach back out to the citizens who raised concerns about the areas studied. With TraffiCloud, Officer Navarro can illustrate the data collected in ready-made reports that are easy to download. The ready-made reports are also displayed in easy-to-interpret charts and graphs to help inform concerned citizens. 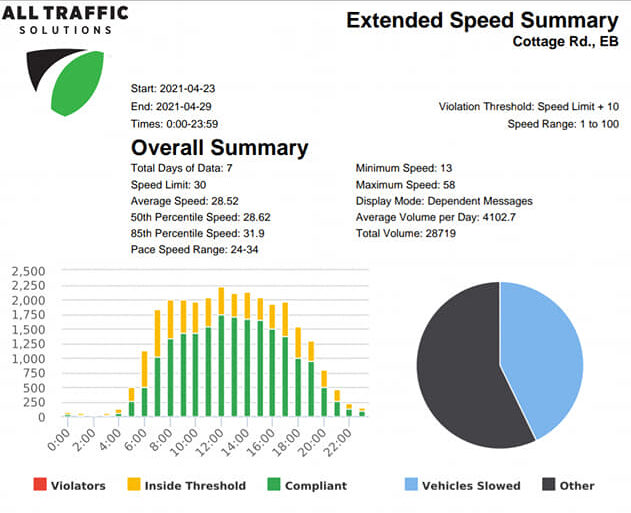 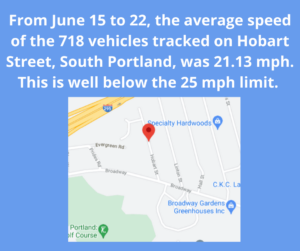 Not only does this help inform citizens about whether there is speeding on the street they made a complaint about, but it also helps show the community that the South Portland PD is listening and taking action. 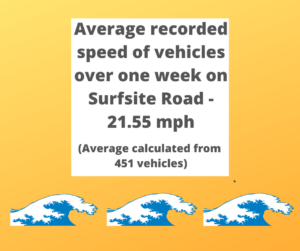 “I think what’s great is that they see that we care about their complaints, and when you give them the hard data and the evidence it makes them think ‘Hey, they are trying to do something.’”

Officer Navarro also notes that “being able to speak to these complainants who have a genuine concern and showing them the data that ‘Yeah we did do a traffic study, here are the numbers,’ and if it does show a speeding problem we’ll adjust enforcement accordingly, or put a temporary speed bump, or the speed trailer, and just basically look at different ways to combat the speeding issue – if there is a speeding issue”

As for what reports Officer Navarro typically shows to the public:

“I think the easiest one to break down and for citizens to look at and understand is the extended speed summary.”

“Because [TraffiCloud] has the graphs—the line graphs, the bar graphs—and I always explain the 50th percentile is [that] 50% of vehicles don’t go over that number. 85 percent, is what Maine DOT uses to set speed limits in the city, 85% of vehicles don’t exceed that number. So I’ll explain what those percentages mean. Those are the most important percentages we look at. Then obviously we see the overall speed which is all the vehicles’ average. Those three averages right there, I’ll explain those to them.”

A Police Speed Trailer or an Officer is Deployed

When the data shows that there is an issue, that’s when Officer Navarro will make sure that his ATS SpeedAlert trailer is out. Police speed trailers are effective for a few reasons. The first is that it will reduce speeding in a problem area. Drivers will see a SpeedAlert sign (this sign has both radar and messaging capabilities) on a trailer, and if the drivers are going over a certain speed there will be red and blue lights that flash to encourage them to slow down. Along with that impact, the trailer will record the traffic data of drivers. The data often shows that drivers are do not speed as much when the trailer sign is up and visible. Finally, the trailer will also make the concerned citizen feel listened to when they see the trailer out on a problem area. 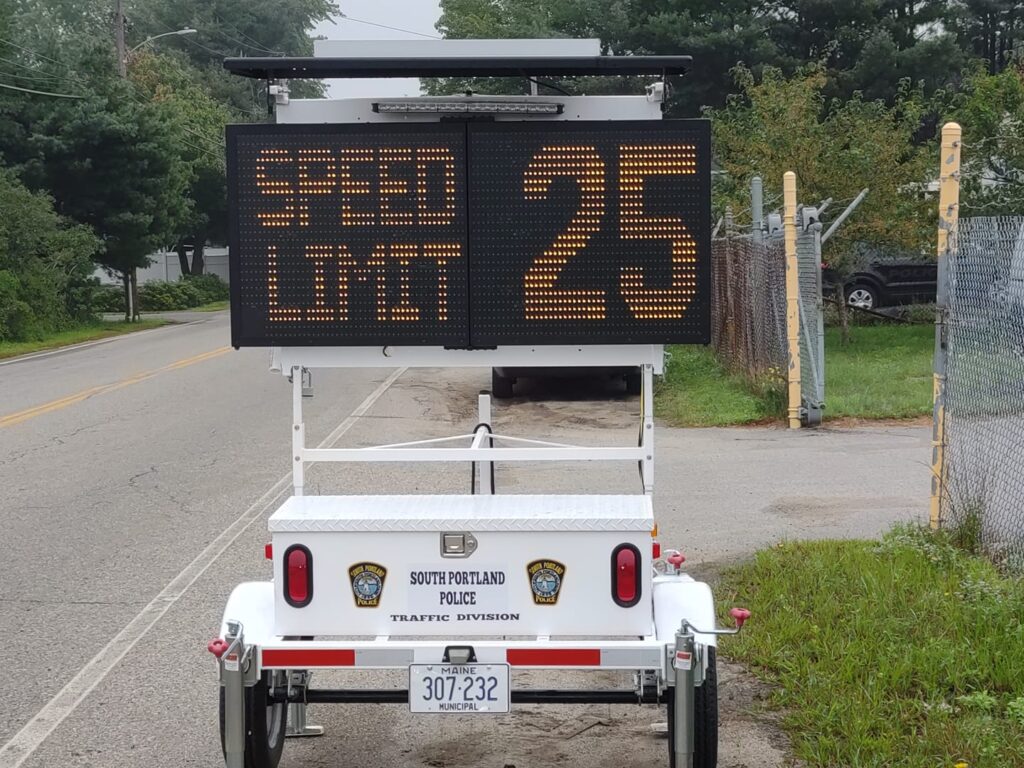 Working with Public Works and the City Manager

Along with informing citizens of speeding issues, Officer Navarro helps improve the community as a whole in tandem with the City Manager.

“What I do is: Say Public Works has an upcoming road project, they want a traffic study done on that road. Not so much the speed but the volume. They want to see what kind of volume they’re getting on that road to either make the lines wider, extend the curb extensions, make the sidewalks bigger.”

The data collected from the StatTrak and SpeedAlert not only address immediate citizen concerns but also helps determine ways to improve driving conditions around the community.

About All Traffic Solutions

All Traffic Solutions has been proudly serving law enforcement and municipalities for over 20 years by providing traffic safety tools such as radar signs, radar speed, message trailers, and portable variable message boards that can be managed remotely by our patented TraffiCloud software.

To show our appreciation for law enforcement and our commitment to public safety we started the ATS Gives Back program. With this program, we commit to donating one sign a month to police departments who demonstrate need.

If your police department or a police department you know might be eligible, please apply with this form (and include any supporting attachments) and send it to ATSgivesback@alltrafficsolutions.com. If you want to see previous winners, you can see them here.

And once again, All Traffic Solutions wants to thank Traffic Specialist Officer Navarro for sharing his experience in reducing speeding for the South Portland Police Department.