How to keep better records with cloud-enabled radar speed signs

Over the last several weeks, we’ve been talking about how you can keep your roads safer with radar speed signs. And today’s the day we step it up a notch.

Now that you understand the basics for deploying and installing speed displays (and if you’re still foggy—we’re always here to help), it’s time to tie it to your entire traffic strategy.

TraffiCloud makes that happen. It’s All Traffic Solutions’ cloud-based ecosystem for managing all your traffic safety equipment, while reducing the amount of time needed to manage all of it. 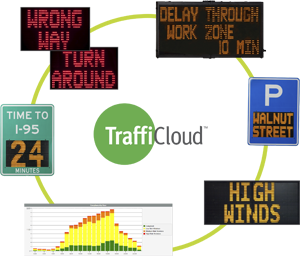 It’s also one of the most dangerous.

“It’s one of those roads where you can’t be out in the middle of it during the daytime. It’s so curvy, drivers don’t see you working,” Mike Bock, Senior Traffic Studies Engineer at the Missouri Department of Transportation (MoDOT), said. “There’s also nowhere to park a vehicle — no shoulder or driveways.”

So in times when the district is tasked with a traffic study on U.S. 160, it takes a team to place the equipment on the road. Several workers stop traffic while others work to nail vehicle counters to the road or lay the tubes across the lanes. Additionally, they have to orchestrate the process again each time the department collects the data. Even then, it still feels dangerous, Bock said.

But now, the device automatically uploads data to a cloud server called the cloud and the Southwest District is able to focus on other problems such as deciphering the data its counters are collecting.

“Traffic engineers are used to spending days tracking down data buried in excel documents saved on someone’s computer,” Ted Graef, of All Traffic Solutions, said. “With the TraffiCloud, all anyone needs to do is login online and everything — from maps to traffic data — is right there. The data is uploaded automatically and when a user clicks a specific location, you see all the data right there and can easily run reports.”

By Lori Miles at All Traffic Solutions