New flashing signs remind motorists to slow down in Brentwood 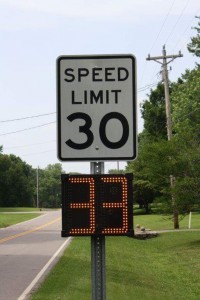 BRENTWOOD, Tenn. (WKRN) – The Brentwood Police Department has a new tool to put the brakes on speeders in neighborhoods.

Two signs with flashing lights show motorists how fast they are driving while reminding them to slow down if they are violating the posted speed limit.

“It is good to be a little more alert,” Officer John Maxwell told News 2.

The new signs attach to traffic sign poles and are placed underneath the posted speed limit.

The mobile signs can then be moved to various locations throughout the city.

“We get complaints from all of the neighborhoods and with limited resources we can’t deploy officers to every neighborhood every day,” said Officer John Maxwell.

Police said not only do the signs show motorists how fast they are traveling, but they also provide officers with useful information.

“It does collect data for us and it gives me traffic counts, captures speed limits or speeds of the vehicles that come through and it maintains all that data for us,” explained Officer Maxwell.

The signs will replace the old radar trailer, which weighs about 3,000 pounds and takes more time to set up.

The department purchased two of the new signs, which cost around $4,500 each.

The new tools just arrived last week, but already seem to be having an impact.

“I’m getting between 60 and 75 percent of people actually slowing down for the sign. Hopefully that will continue,” Maxwell said.

The radar signs will stay in each location for a day or two before being moved.

The department plans to eventually move them to all areas where residents are complaining about speeders.