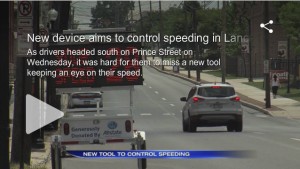 LANCASTER, Pa. (WHTM) – As drivers headed south on Prince Street on Wednesday, it was hard for them to miss a new tool keeping an eye on their speed.

“Naturally, when you see a sign like that you automatically feel that police are around and trying to put you in a speed trap,” said Nathan Graves, who lives in Lancaster.

The new device, which looks like an electronic billboard, is called a traffic trailer. The device can’t give tickets, but police Sergeant Bill Hickey told ABC 27 News it can do something else.

“It’s there, and designed, to remind people of the speed limit and what their actual speed is,” he said.

After getting complaints from residents about lead foots for years, Hickey said the department has had their eye on something similar for a while. He said other options were too expensive and would have forced the department to make cuts. Allstate donated the trailer.

“We didn’t have to cut one thing out of the budget,” Hickey said, “and we could get something that was useful in a multitude of ways.”

Hickey said while some might people underestimate the value of the new tool, he stressed that it’ll keep folks in Lancaster safe.

“When you’re talking about reminding people to drive safely and slowly on the streets of Lancaster, I think we might not be able to measure how valuable that is,” he said.

Hickey said the device is portable and they’re looking for suggestions on where it should be placed. He said anyone with ideas should call the police department.