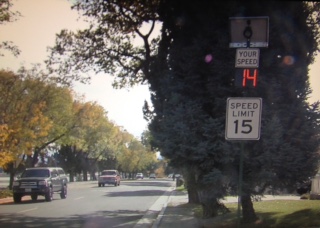 Typically, if you’re using a portable radar speed display, it needs to be at least 5-6 feet off the ground so it’s above any car that’s parked or pulled over in front of it. That ensures the sign is always visible to approaching drivers. Generally the higher the better—within reason of course.

Most LEDs on radar speed displays have a 20 to 30 degree viewing angle, so as you drive by, they fade out of view. This prevents drivers from confusing their speed with the car in front or behind them, and keeps them from looking at the display rather than looking ahead down the road as they get close to the sign.

The best location for the radar speed display is where the traffic is free-flowing on a straight stretch of road. This location will provide the highest effectiveness as it has the best visibility to the driver. A location such as this will not always be available, so try to make the location as optimal as possible by following these suggestions.

Test out the location by approaching the sign in your vehicle. Try to make the approach to the sign long enough so that the driver can see and process the displayed speed in order to take the appropriate action. Look for locations where there are not a lot of other distractions. In a neighborhood this is not generally a problem, but on an arterial, look for locations without a lot of other traffic and commercial signage so that the speed display stands out. If possible, mount the sign near or on the same pole as a speed limit sign so drivers know the posted speed limit. Mount the sign in advance of a problem area. For example mount it to slow drivers down before a curve, don’t mount it on the curve itself. It’s too late to slow someone down at that point.

If there is a busy intersection or cross street in the view of the radar speed display, the display might pick up cars from the cross street in addition to the vehicles you are trying to calm. Move the sign as far away as practical from cross streets and reduce the display’s radar sensitivity so cross traffic is not detected. If the sign were to display the speed of a vehicle rather than the approaching vehicle, the driver will become confused and not trust the sign.

Current radar speed displays are so portable and lightweight, they can be attached to any street sign and easily adjusted for oncoming traffic. While there are more things to learn about installing a radar speed display, following these tips will set you up for success. Just don’t forget to turn it on!

by Lori Miles at All Traffic Solutions

ShareTweetPin itShare
Previous
Where to put a radar speed display so you get the best data
Next
What does 85th percentile mean? A concept to improve traffic safety