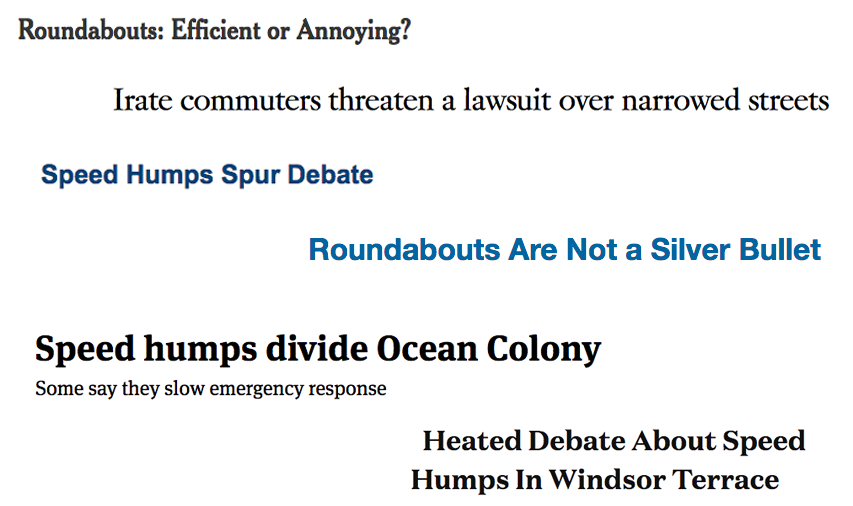 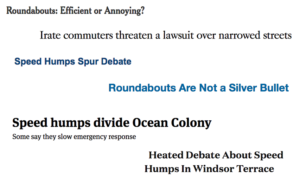 Not a week goes by that at least one community in the US is locked in a heated debate regarding which traffic calming method they should implement on their busy roads, or disputing the method already in use. Just last week, one community in St. Louis made news when several of the large concrete spheres installed to slow traffic were being knocked off their bases by speeding vehicles and rolling down the street. Some of the same citizens who had requested and supported the measure are now demanding the “hazards” be removed. The cost to erect the structures? $235,000. No word on what it will cost to dismantle them. 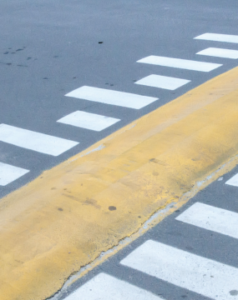 Speed humps, which would seem to be among the most straightforward of traffic calming tools, are also causing controversy. People who live next to speed humps say they don’t slow down cars—and they’re noisy, especially when trucks slam over them.  Many opponents of speed humps say they only move speeders further down the street and, once out of speed hump territory, drivers make up for lost time by hitting the gas.

Speed humps annoy drivers because of their potential damage to a car’s suspension. The bumps also reduce fuel efficiency and evidence suggests they contribute to increased air pollution. A study by the Cameron School of Business at the University of North Carolina Wilmington found that each speed hump between the main drag and the house appeared to reduce home values by $5,000 or more.

Many communities are opting to remove the very speed humps they fought to install, at a cost of roughly $1,000 per structure. Because of the likelihood that residents will change their minds, coupled with the expense to remove them, some localities are making residents fund an escrow account for speed hump removal before they can be installed.

Curb-bumpouts, essentially an extension of the sidewalk into the street, are becoming more popular. However, as curb-bumpouts increase in popularity, it is important to note the many design and management problems associated with them.  When you add a bumpout to a city street you may actually have to change the official City Plan. In Philadelphia, for example, long bumpouts require an ordinance to be introduced into City Council while smaller bumpouts require a letter from the Streets Commissioner and a public hearing. 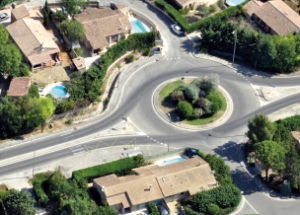 Roundabouts can be a great solution and do save lives where they are utilized. While roundabouts have safety and environmental advantages, they require years of planning and budgeting by DOTs and are not a quick solution to traffic speed issues. Also, when first introduced at a particular location, they tend to cause confusion and congestion as drivers are unsure who has the right of way as they approach. Roundabouts can be tricky to navigate in bad weather, particularly in areas prone to snow and ice. They can also cause drivers to disrespect the yield upon entry rules, especially when there is unbalanced traffic flow between the approaches.

Radar speed displays: an effective measure your town can agree on 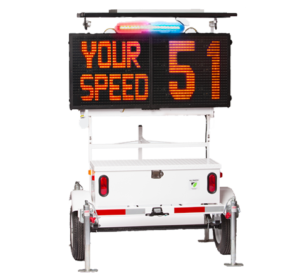 First and foremost, most drivers are unaware that they are speeding. Their attention is focused on their daily lives. With the presence of a radar speed display sign, these drivers voluntarily comply with the posted limit. For them, the radar speed sign is a gentle reminder to focus on driving safely.

Installing radar speed signs is straightforward; they don’t generally require a cumbersome approval process or time-consuming DOT studies. One person can handle the quick installation of a single sign, and the roadway will immediately experience the benefit of traffic calming. The portability of the newer radar signs gives users the flexibility and agility to impact multiple roadways over time. Some would argue that the effectiveness of radar speed signs becomes “stale” when installed permanently, however, radar speed displays have as much as a 72% effectiveness rate in slowing vehicles down and keep citizens safe from speeding, they have a lasting effect on traffic calming. A 2004 Texas Transportation Institute study found that the average reduction in vehicle speed four months after a radar speed sign was permanently installed in a school zone was 9 mph. All Traffic Solutions customers are seeing reductions in speed of as much as 23% and more after installing a radar speed display

You can use this traffic data to:

Radar speed displays are a cost-effective and expedient solution to traffic calming, which can be a valuable complement to longer-term engineering solutions. That’s something your entire community can get behind. 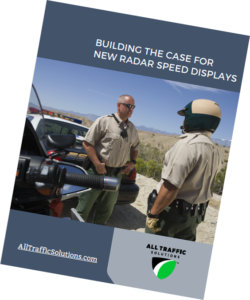 Get the facts you need to make the case for new radar speed displays in your community. Read this free guide.

ShareTweetPin itShare
Previous
How Agencies Can Easily Automate Traffic Management Using the Internet of Things and Cloud Technology: Part I Conditional Messaging
Next
Build Your Case for New Radar Speed Displays in Your Community